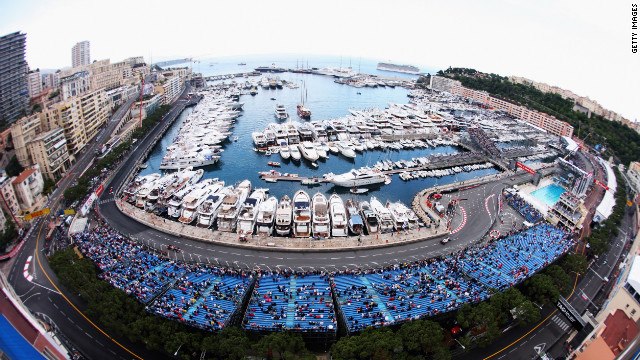 It is always questionable at the Monaco Yacht Show what the bigger spectacle is: the superyachts in the glittering waters of the Port Hercules, teak decks shimmering in the sun; or the customers who come to shop, hoping to drop their next €100 million on a floating palace.

Where boats are concerned, nothing is too outlandish. One of the biggest showstoppers

‘s 78.5 meter Hampshire 2, whose helicopter landing pad can be transformed into a tennis, netball or baseball court at the touch of a button (price upon request). New boats with wow factor to watch out for are Couach’s La Pellegrina, Nobiskrug’s Mogambo and Heesen’s Lady Petra, as well as Wally’s futuristic offerings.

As for the clientele, the Sept. 19-22 show is where suntans come in one color—all-year round—arm candy is a bejeweled Chihuahua and monogrammed Louis Vuitton, and one’s social diary is overbooked. The Thursday night of the show is a case in point, with three not-to-be missed parties coinciding: the Fraser Yachts Captain’s Dinner, Boat

International’s bash at L’Hermitage and the Bal de la Mer at the Fairmont hotel, where the International SeaKeepers Society will present Agnès B designer Agnès Troublé with an award for her sailing expeditions to raise awareness for marine conservation.

But gloss aside, those inside the yachting world are hoping the event will attract some much-needed cash to the industry, which has been hampered by the recession—even if it comes at a discount.

“Simply due to the nature of the market, people will be looking for a good deal,” says Rory Trahair of Edmiston. “You don’t need to pay a premium—it is a buyers’ market, no question. However, sellers are unwilling to accept that the market has changed, so our job is to negotiate.” The firm will be bringing 22 yachts to the show, including Nirvana, and selling Candyscape II—whose interior was designed by property developers Candy & Candy—for €47.5 million.

“There are boats which will have 40% off their original build cost,” says Jonathan Beckett, chief executive of Burgess Yachts. “Everyone is looking for a deal. However, there is a difference between a deal and a steal.” The London-based dealer is bringing nine yachts—including Smeralda, which, at 77 meters, is the largest superyacht to have been built in Australia (price available upon request).

There may be deals to had, but buyers at the high end are still looking for the same thing: luxury and discretion (at least when it comes to buying). “High-profile potential buyers of superyachts are recognized at the show, but do not advertise when they are coming or what they are viewing in advance,” says Nick Jeffery, a yacht consultant and author of “Luxury Toys: Mega Yachts.” “Roman Abramovich is the kind of person you could easily pass on the quay side, checking out a new tender, perhaps in a pair of shorts and Hermès flip-flops. Other less-recognizable buyers are usually being shadowed by brokers trying to protect their client from other brokers.”

The show will also see the launch of several new environmental initiatives, as eco-consciousness starts to take hold of an industry whose main product still often uses rare materials and large amounts of fuel. “The degree to which things are green is, of course, debatable,” says Mike Reeves, of yacht interior designers Claydon Reeves, which is bringing its glass-sided concept yacht Exo to the show. “However, it is coming through innovative hull design and the use of diesel-elective propulsion systems. It also requires the use of more sustainable materials. It takes a visionary owner to ask for no teak on the deck and to use more considerate materials instead.”

The Wood Forever Pact, which encourages the use of sustainable timber in yacht building in a bid to help curb deforestation, is pushing builders to check the origins of woods used in superyacht. The Blue Marine Foundation, meanwhile, will launch a virtual yacht club, where owners pay varying amounts to create marine reserves around the world. On Sept. 19, Prince Albert II of Monaco will officially launch the club at a lunch on Wally’s Better Place yacht, unveiling the Ralph Lauren-designed flag that will fly from all yachts that have signed up to the challenge.

The foundation, which has the support of entrepreneurs such as Ernesto Bertarelli and Gerald Ronson, is hoping to attract more interest at the show. “We feel this is the most important yacht club in the world,” says founder Chris Gorell Barnes. “Depleted marine reserves is the biggest solvable problem globally. We know what we have to do and we have 30 years left to do it.”

However, Burgess Yacht’s Mr. Beckett says that the industry as a whole still has a ways to go. “A lot of the owners like to think they are being environmentally friendly, but most fly around in private planes. They use eco-friendly fuels, but still want teak decks,” he says.

But the current economic climate may be aiding the move toward a more environmentally friendly product. Preshow enquiries made to brokers seem to indicate that more people are looking for sailing boats and smaller boats this year. “Sailing yachts have good days in front of them,” says naval architect Jean-Jacques Coste, who says he expects more people will be looking to buy these fuel-efficient boats. “After all, the wind is free.”

Luca Bassani, founder and chief executive of Wally, says the company will be showing three new yachts, including Better Place, the first sail with the RINA Green certification and diesel electric propulsion and the world’s largest carbon-fiber sloop. “People this year are looking less for fast boats and more for comfort and sustainability, with less pollution and noise,” he adds.

This brings with it a return to tradition in design. “We are trying to re-evaluate some of the traditions of yacht design,” Mr. Reeves says of his Exo yacht, which features glass along the side of the hull that will flood the interior with light and offer those inside views of the ocean. But that doesn’t mean buyers will be giving up luxury. Designer UltraLuxum’s CXL, a concept trimaran yacht, when built, will come complete with a sports car parked on deck.

For those looking for a relative bargain, the sales market is strongest in the 35-45 metercategory at the moment, as the smaller boats are more cost-efficient to run. As a result, the 45-65 meter sector, which is particularly flooded at the moment, is the best place to cut a deal. “In 2005, if a 60-meter boat came on market, it wouldn’t need to go on [the open] market, demand so exceeded supply,” says Mr. Trahair. “Now, there are rather more sellers than buyers.”

There are also predicted changes to the charter market, which will become stronger as the bottom falls out a little from sales. Mr. Trahair says he expects yachts to be chartered to more exotic destinations, such as the South Pacific and the Indian Ocean.

Even so, the mood remains cautiously optimistic. “Everyone is hoping for this great upsurge,” says Mr. Reeves. “It has been very flat for a while and the boom time is over, but maybe this is the big turning point.”