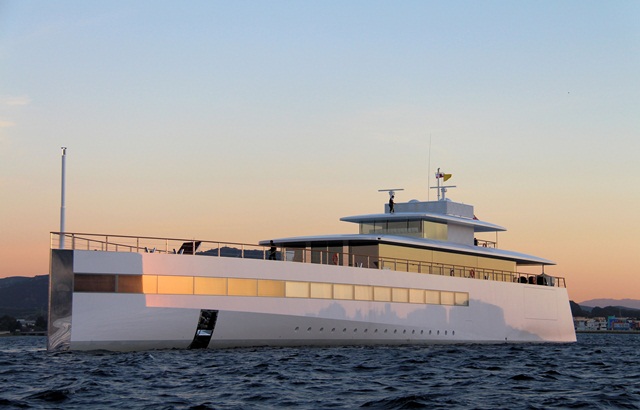 Late Steven Jobs’ Yacht “Venus” On Her Way To America

Given that the new Feadship Venus was photographed in Gibraltar this weekend, it’s likely that the megayacht is planning to make her way across the Atlantic Ocean to North American shores. It’s also likely that yacht-watchers will get more good looks at her, and the myriad details that make this megayacht an excellent example of custom construction.

You may recall that the 256-foot (78-meter) Venus launched in October, commissioned by the late Steve Jobs, the founder of Apple. She was built by Feadship’s Royal De Vries at its Aalsmeer, Holland facility. Though Feadship declined to confirm whether or not Jobs was a client, the entrepreneur did tell his biographer, Walter Isaacson, that he was building a megayacht with Feadship that was “sleek and minimalist.” “The teak decks were perfectly flat and unblemished by any accoutrements,” Isaacson writes. “As at an Apple store, the cabin windows were large panes, almost floor to ceiling, and the main living area was designed to have walls of glass that were forty feet long and ten feet high. He had gotten the chief engineer of the Apple stores to design a special glass that was able to provide structural support.”

Philippe Starck, the renowned designer, confirmed he’d worked with Jobs and his wife Laurene on the project since 2005 and declared Venus “revolutionary.” While you’ll probably agree in seeing Venus in full profile, closeups of her details as created by Starck and Jobs are more telling. Take a good look at Venus’ transom, and you’ll note an ever-so-subtle curvature. You’ll also note an enormous section of her transom either folds down or flips up. Our guess is that it flips down, to allow guests access to board watertoys and tenders, and perhaps even dive into the water directly. Also note the side hatch, situated right beneath the Feadship logo. It could be a balcony, given the popularity of this feature on many modern megayachts.

Venus bears abundant linear details, with her sharp bow among the most prominent. It’s accentuated with polished metal, as evidenced by the reflections of the setting sun and the water here. Note, too, the long rectangular windows flowing aft, mentioned by Isaacson in the biography. Sixteen of them lie to each side of Venus, stopping just aft of amidships.

This full-profile view of Venus gives you a better sense of the dramatic effect of the design. The rectangular ports draw your eye aft, where you then look up and linger a bit longer on the full-height glass adorning the upper decks. As for the uppermost deck, it’s said to be hiding satellite antennas and related equipment.

Jobs was unfortunately already in failing health when Venus was under construction. “‘I know that it’s possible I will die and leave Laurene with a half-built boat,’” Isaacson quotes him in the biography. “‘But I have to keep going on it. If I don’t, it’s an admission that I’m about to die.’”

It’s probably safe to say that yacht-watchers everywhere are also glad he kept going. Even with other interesting megayachts under construction around the world, Venus stands out as an extraordinary work.