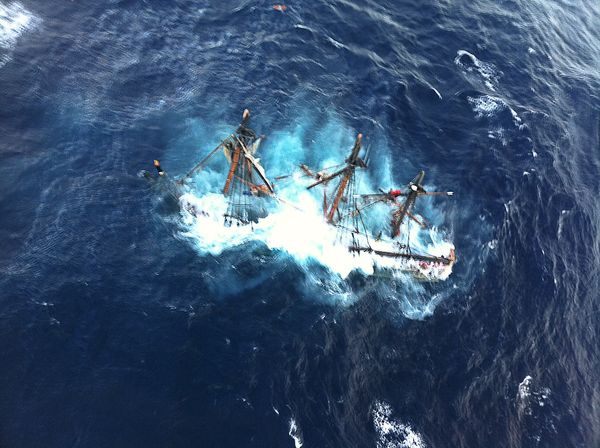 The masts of the H.M.S. Bounty reach skyward as waves stirred by Hurricane Sandy pull the tall ship’s hull to the seafloor on Monday. The sailing vessel—a replica of the 18th-century ship of the same name—was off North Carolina when the crew radioed in a distress call on Sunday, a day before Sandy’s landfall near New York City.

Fourteen of the ship’s 16-member crew are reportedly in good condition after a U.S. Coast Guard helicopter rescue Monday. Two others, Claudene Christian and Capt. Robin Walbridge, were swept overboard when the ship keeled over in 18-foot (5.5-meter) waves.

Several hours after the initial rescue, the Coast Guard found Christian’s unresponsive body floating in the water. Walbridge is still unaccounted for.

Built in 1960 for the 1962 film Mutiny on the Bounty, the H.M.S. Bounty replica was also featured in a Pirates of the Caribbean movie.

The original Bounty had become famous, or rather infamous, in 1789, after half its crew mutinied and abandoned the captain and his followers in a boat at sea. One of those mutineers, Fletcher Christian, was a great-great-great-great-grandfather of Claudene Christian, who was pronounced dead at a hospital Monday, according to the Associated Press.

May She Rest In Peace.